guide to demountables ... similar but not the same

Fifth-wheel: The fifth-wheel, like the demountable, was developed first in the United States and enjoys its greatest popularity there. Although one or two European manufacturers have worked with the fifth-wheel concept, they have not managed to make significant in-roads into either the caravan or motorcaravan market. Those fifth-wheels that are made for the American market tend to be large (sometimes VERY large) exploiting the fact that they have their own weight-bearing axles. Depending on their size and weight fifth-wheels might be pulled by anything from a 'domestic' pickup to a 'commercial' truck. What they all have in common is their articulation around a turning plate (the fifth wheel) situated in the pickup or truck bed over the rear axle. 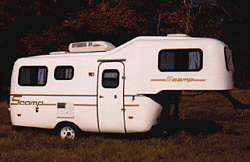 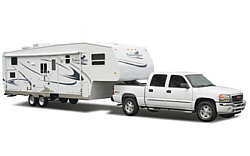 Clip-on: The duck-billed platypus of the caravan world - neither one thing nor the other and confined to just one continent! As far as I know these things are unique to France, and not particularly common even there. 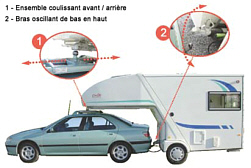 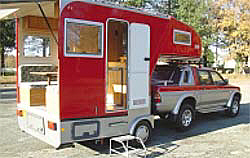 Both the ClipCar (above) and the RandoCar (below) work on the same principle. Like a caravan the clip-on is towed by a car and, like a caravan, it has its own axle and so carries its own weight but, unlike a caravan, it does not articulate. The clip-on is attached to the car by two tow hitches - a fixed one behind the car as usual, and a sprung, sliding one on a special rack attached to its roof. The idea, and the claim, is that once joined together the car and clip-on essentially become a six-wheeled motorcaravan. 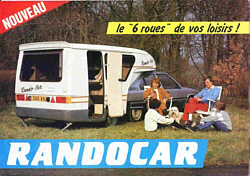 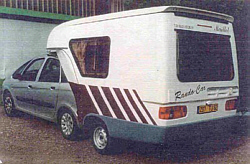 I don't know which of the above French manufacturers would claim to be the originator of the principle but they may have found inspiration in this extraordinary truck camper made by Born Free in the USA in the 1970s (below). Like a demountable the Born Free sat in the bed of a pickup but at least half of its length, and presumably some of its weight, was carried on a bogie behind the tow vehicle. 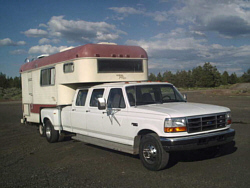 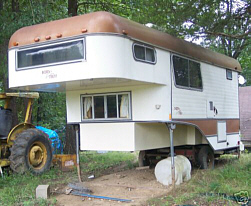 TOP of the page

Like the mythical missing link the examples described on this page sit somewhere between the towed caravan at one extreme and the carried demountable at the other.

They get a mention on this site because they bear some of the same characteristics and advantages of the demountable camper and may therefore be of interest.