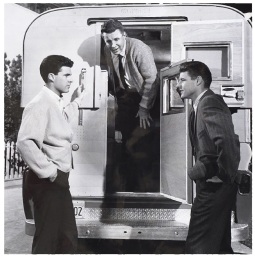 It's generally acknowledged that the demountable truck camper concept was first created, and certainly was popularised, in the USA by Walter King when he began manufacture of the 'Sport King' camper in 1945 in Torrance, California ...

• keisterphoto.com - The story of the development of the Sport King is described in full by photographer Douglas Keister in his spendid book 'Mobile Mansions' but you can see one of Keister's photos of the Sport King (there are more in the book) and read his text online here.

• conceptcarz.com - If you want to see further photographs of the Sport King there is a beautiful 1949 example on a 1952 Ford F2 truck in the private collection of Milton Newman photos of which can be seen on the ConceptCarz website.

• books.google.co.uk - Popular Science, May 1964, '1964 Truck Campers' - an overview of new models and new features in the 1964 crop of campers, including the extraordinary 'Sky Lounge' by Delrey and the 'Dynatop' flat-pack camper kit from Western Dynamics Corp.

• books.google.co.uk - Popular Mechanics, May 1966 (pages 132-137) 'Build a High-Low Pickup Camper' - article and plans for a compact truck camper with a radical plan of dropping an area of floor (which, alarmingly, they call 'the sump') between the chassis rails in order to gain standing room inside.

• books.google.co.uk - Popular Science, March 1973 (pages 132-134) 'Inside the Telescoping Camper' - article descibing the construction of a telescopic truck camper. The plans were not included in the magazine but were available for sale separately.

• books.google.co.uk - Popular Mechanics, May 1971 (pages 166D-166J) 'How to Match your Truck and Camper' - the vintage approach to matching the pickup and camper. Perhaps not surprisingly it's much the same as the contemporary approaches on the s.a.D. matching camper & pickup page.

• books.google.co.uk - Popular Science, June 1970 (pages 64-66) 'For your wagon, build this pop-up camper' - until I found this article I had assumed that the crazy idea of building a demountable camper to fit on a car rather than a truck (see the Belgian 'Dodoo' and Swedish 'Toppola' on the European manufacturers page) was a new thing, but evidently not. It describes the building of a clamshell, pop-up camper for a Ford Country Squire station wagon. As usual with these Popular Science articles, plans were available for purchase.

• rqriley.com - Robert Q. Riley is a company selling plans to build just about anything, many of them drawn from Mechanix Illustrated and other old magazines. The list includes the 'Budget Camper', plans for a demountable which, at the time of publication, Mechanix Illustrated claimed could be built for $1200!

• rvadvice.com - A list of US and Canadian truck camper manufacturers from the RVAdvice website, the vast majority of which are no longer in production (curiously described as 'orphan'). Offers an interesting historical perspective with an unmistakeable trend (continuing in the current financial climate) from many, small builders towards few, large ones.

• vintageprojects.com - As their name suggests, Vintage Projects offer old self-build plans collected from a variety of sources including this classic pop-up demountable from the May 1967 issue of Popular Science magazine. If you want to see the plans and accompanying article as they were originally published, you can do so on Google Books here.

< BACK to 'of historical interest' • ^ TOP of the page

North America of course is the home and birthplace of the demountable camper. Not surprisingly therefore it's also a vast resource of historical material. The selection here ranges through the interesting to the bizarre.

If you find dud links here or if you're aware of other stuff that should be included, please let me know.